G and I had a nice time on this trip and saw many beautiful views that I decided to write a post about it! It will be mostly pictures.

On Monday we flew into Missoula, Montana, arriving just before 6:00 p.m. I get terrible bouts of motion sickness during turbulence or rough roads or in boats so I really hate traveling no matter the means. We had three flights from NC to MT and the middle flight was the worst and I got sick... in my seat (thankfully made it in the bag) and then again in the back of the plane because both lavs were occupied. I felt so embarrassed and so bad for the attendant but she reassured me that hazmat would clean it up and it happens all the time. G said he didn't even notice what happened until he looked across the aisle and saw I was missing. So hopefully no one else noticed or at least has forgotten by now.

We rented an intermediate SUV and we lucked out and were upgraded to a larger vehicle, a Dodge Durango. Since we were in grizzly bear country we decided to sleep inside the vehicle. It worked out nicely and we were mostly guaranteed a flat surface to rest on.

Monday night we camped at a small campground, I think it was called Yellow Bay, on the east side of Flathead Lake. We were only there from 9 pm - 6 am so I only saw the restroom and the car.

Tuesday we were up early and on our way to Kalispell for, most importantly, coffee, breakfast and to pick up some groceries for the week ahead. We ate at Splitrock Cafe and it was awesome. We both ordered the early bird special, which was a huge amount of food for $6.95. Breakfast is my favorite meal so I love when I can get everything I want for under $10.

We went to Wal-mart for groceries and to Cabela's for bear spray. We topped off the gas tank at Costco (it was $2.93/gallon) and headed to Apgar and the west entrance of Glacier National Park.

After getting my park passport stamped at the visitor center (yes, I am a nerd) we began our journey to Kintla Lake. We stopped in Polebridge at the mercantile to try a huckleberry bar and huckleberry beer. I was worried that the August 11 wildfires at Lake McDonald would ruin our time on the western side of the park but it was clear and beautiful with no issues breathing.

At Kintla Lake we just sat by the water and made lunch. We saw a small flock of Common Mergansers (ducks) that were very social and fun to watch dabbling in the lake. There were also Cedar Waxwings flitting about in the trees. The campground was mostly empty but we had decided to camp in Flathead National Forest that evening, which is free.

After 3pm the road to Bowman Lake would be open for travel so we decided to head that way and see the lake before dinner. It was equally as beautiful as Kintla. So serene and very few people. It was amazing how clear the water is there. You can see the rocks at the bottom and any logs underneath the surface. On the drive into Bowman Lake we drove up on a young Grizzly Bear right on the road. There was another car there and the bear was curious about the cars and seemed a little weary. I knew we were way too close and he could attack the car if he wanted. I'm glad he didn't and decided to move on. On the way out we saw him again eating huckleberries and enjoying himself just a few feet from the road.


For dinner on Tuesday we stopped in Polebridge for a second time and ate at Northern Lights Saloon. This was our favorite meal during the trip. I have a Cobb salad with chicken and G had a burger and fries. The had some local beers but I can't recall the names.

On Wednesday we were greeted with a beautiful sunrise at our "private" camp spot. When driving back towards the park we noticed the smokey haze was worse and you could actually smell the smoke outside. We decided to start our trek to the east side of Glacier.

The Going To The Sun Road was closed so we weren't able to drive through the park from west to east. It made for a long drive to go completely around the park. We stopped at Two Medicine but it was so windy we decided not to hike there. I bought a coffee in the gift shop to warm up, snapped a photo and we were on our way to St. Mary's to hopefully snag a campsite.


After securing our campsite at St. Mary's Campground we drove to Logan's Pass along Going To The Sun Road. The GTTS Rd. was only open from St. Mary's to Logan Pass because of the Howe Ridge Fire.
Thursday was going to be the day for hiking. We didn't want anything too difficult so we opted for the St Mary's Falls trail. It lead to 3 waterfalls and round trip is was about 6 miles.

This was a great hike. There were other people hiking this trail so we didn't have to sing or act crazy to scare the bears. We also saw a moose way out in the lake. You definitely needed binoculars if you wanted to see it. She was eating plants out of the water and even swam!

By Thursday afternoon my enthusiasm must have waned because I only took a few pictures. Only one of the Many Glacier area! We did have a neat experience though. There was a hillside behind the Many Glacier lodge and gift store. There were two Grizzlies in the meadow and at times tussled. It was so cool to see their behavior. You also needed binoculars to view them.

Thursday night we stayed at St. Mary's Campground for a second time. We had to move spots because we didn't have any reservations but it was no big deal since we were sleeping in the back of the Durango. My Aunt and Uncle also were camping there that night so we were able to have dinner with them.

Friday was a long day of driving back to the west side of the park. We explored the town of Whitefish, found a "beach" to relax at before dinner and then went on a wild goose chase to find a campsite on top of a mountain.

Saturday we had breakfast in Whitefish before headed south to Missoula. We stopped in Kalispell and went to a farmer's market on the way. We checked into our AirBnB in Missoula and went exploring their town before calling it a early night. We had an early flight home the next day.


We both had a good time on our Montana vacation. We both enjoyed seeing the sights. We should have hiked more or tried fly fishing but all-in-all we are pleased. Montana is a beautiful state and after I visit some other new to me states I think I'll go back. :D 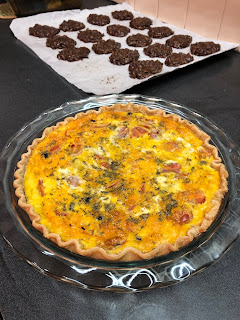 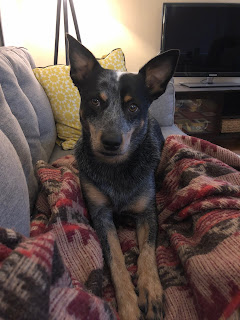